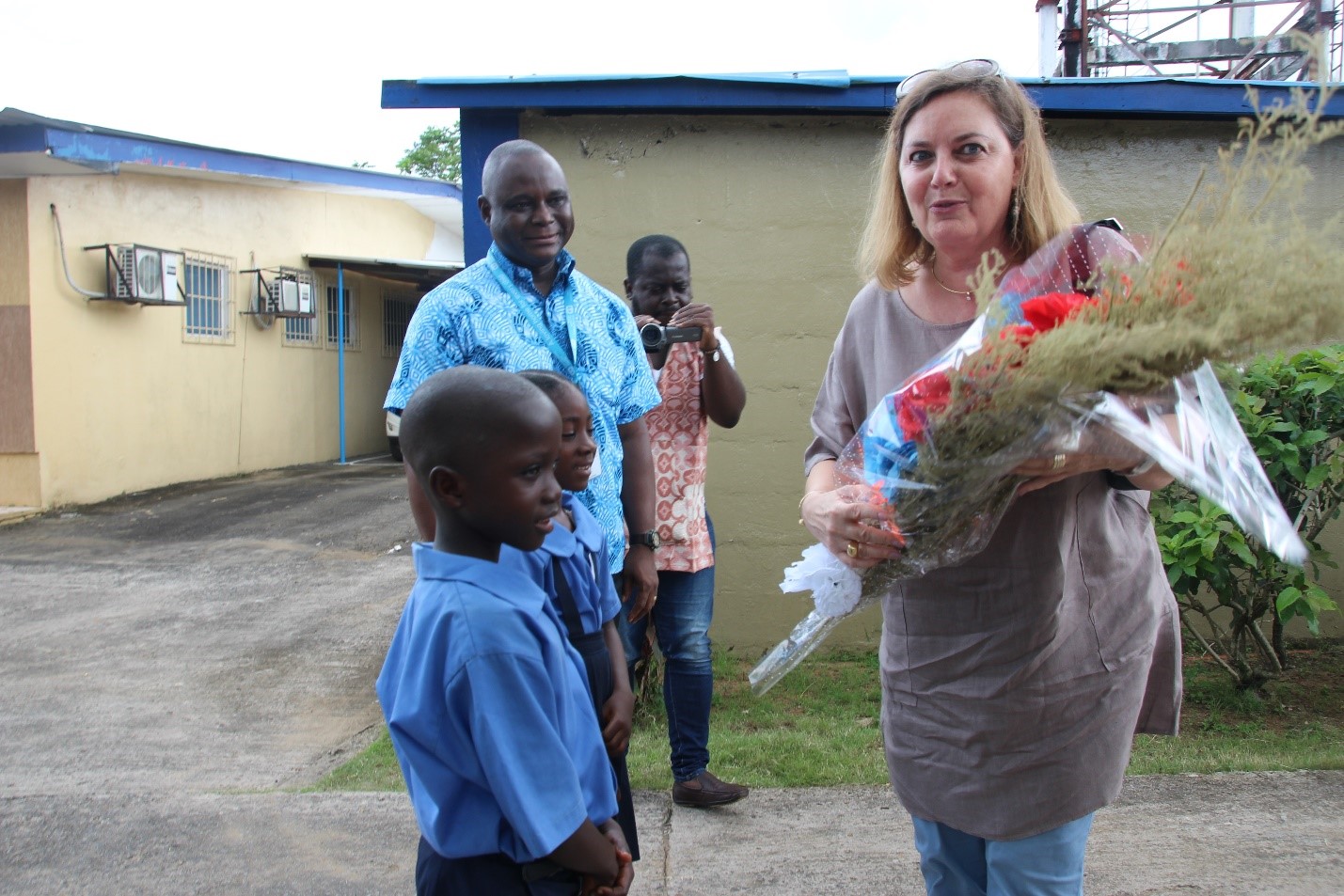 The Head of European Union Delegation to Liberia, Her Excellency Madam Hélène Cavé and entourage on October 11th, visited SOS Children’s Villages Liberia. Upon her arrival, the EU Diplomat was presented a bouquet of flowers by six years old Caroline Fahn from House five of the Monrovia Children’s Village.

The National Director of SOS Children’s Villages Liberia, Mr. Augustine A. Allieu welcomed the Ambassador and her entourage and took them to the National Office conference room where a brief PowerPoint presentation of SOS’ work in Liberia was presented, with all National Office staff in attendance.

In his remarks, Mr. Allieu thanked the Ambassador on behalf of the staff. He noted that “often Ambassadors meets government officials and other diplomats, but I am glad that on this International Day of the Girl Child you left your busy schedule to interact with these adolescent girls.” Adding “I thank the staff of both the EU and SOS for all efforts made prior to this meeting and we are looking forward to a productive visit.” Mr. Allieu stressed that SOS Children’s Villages has a great desire to enhance the life of young people and families. He noted that SOS Children’s Villages Liberia is open to partnerships that would increase it’s work, including in Family Strengthen Program in communities. He hoped that some partners can assist the organization to support some of the facilities and programs. Mr. Allieu concluded that SOS Children’s Villages programmes are implemented in line with the UNCRC, UN Guidelines on Alternative Care, the Sustainable Development Goals (SDGs), as well as the Government of Liberia policies on care and social protection of children and families.

The staff meeting with the Ambassador in the conference room was followed by an interactive discussion with 10 girls from the SOS-Hermann Gmeiner International School Monrovia as part of activities in observance of International Day of the Girl Child.

The interaction which focused on challenges faced by Liberian girls was well-rounded, healthy and effective. The one hour “Palava Hut” discussion took place in the garden at the back of the National Office. The girls used the occasion to discuss some of the problems girls and women are faced with in Liberia. Life is not often easy for young Liberians. It has been 3 years since the outbreak of the deadly Ebola crisis, many communities and families are still struggling. Poverty is rampant, school enrolment rates are low and adolescent pregnancy rates are high. Although basic education is considered a free commodity, it is still not easily accessible for many young girls living in Liberia.

Bendu Howard of grade 7 noted, “Society must strive to educate young people regardless of their sex or where they were born. She concluded that gone are those days when people thought women were only meant for kitchen.” While Korpu Freeman of grade 8 lamented, I never entered school until I came to SOS Children’s Village. Now here I am, I hope others can have such an opportunity. But some are forced to marry at an early age and become, a vegetable farmer in the same village.”

Tarwon M. Wei, a student of grade 9 lamented “even though we see ourselves going to school every morning, there are many children out there who lacks the opportunities we enjoy. Therefore, it is critically important that society must create enabling environments to ensure that education is provided for every young person.”

Assata Kroma, a student in the grade 11 lamented that “empowering young girls will not only give them self-confidence, self-esteem, and self-worth but it brings with it relevant and economic benefits to them and their families.” While Yonnie Lloyd, a senior student added “when a girl earns her education, she is most likely to help her community to make a difference.”

Other prevalent issues that are of grave concern, and discussed in the Palava Hut meeting include: Gender Based Violence; rape; Sexual exploitation; the lack of marketable vocational and technical skills; illiteracy; and lack of equal opportunity.

Liberia’s young population is one of the nation’s most valuable assets. Taking into consideration that the majority of country’s population is youthful, with many of them are females.

Ambassador Cavé gave examples of her life experiences to encourage and challenge the girls to aspire for success despite the many difficulties. The ambassador noted “all over the world it is difficult for girls to achieve her dreams in a male dominant society.” She encourage the girls to be strong and focus, adding “life is a fight and never give up the fight.”

About the International Day of the Girl Child:

In 2012, the first International Day of the Girl was launched following global advocacy by girls themselves to establish the day formally, through a United Nations Resolution, with support from the Canadian delegation and Plan International, to raise awareness about the challenges that girls face and to take action.

The movement was joined by many organizations, in a concerted action to show support for girls on the 11th of October each year. The main rationale for the day is making the invisible lives of girls – both their plight and their power – truly visible, and to inspire commitments and action to promote girls’ rights. Growing each year since 2012, the International Day of the Girl (IDG) is now a foundation for advocacy and gender-oriented activism for many organisations, including SOS Children’s Villages.

Under this year Global theme, With Her: A Skilled Girl Force, mark the beginning of a year-long effort to bring together partners and stakeholders to advocate for, and draw attention and investments to, the most pressing needs and opportunities for girls to attain skills for employability. SOS Children’s Villages Liberia this year partnered with Plan International to have a “Girl Take Over,” which saw many young girls serving in key positions for the day, including the position of Vice president of the Republic of Liberia, Country Directors, School Principal, Senior Managers in various offices, and many more.

This year National theme is Prepared Girls: “A Transformed Workforce.”

Educated and skilled workers are in great demand, but roughly a quarter of young people – most of them female – are currently neither employed nor in education or training. SOS Children’s Villages Liberia aims to highlight and address the needs and challenges children and girl’s face – particularly those without adequate parental care, while promoting girls’ empowerment and the fulfillment of their human rights.