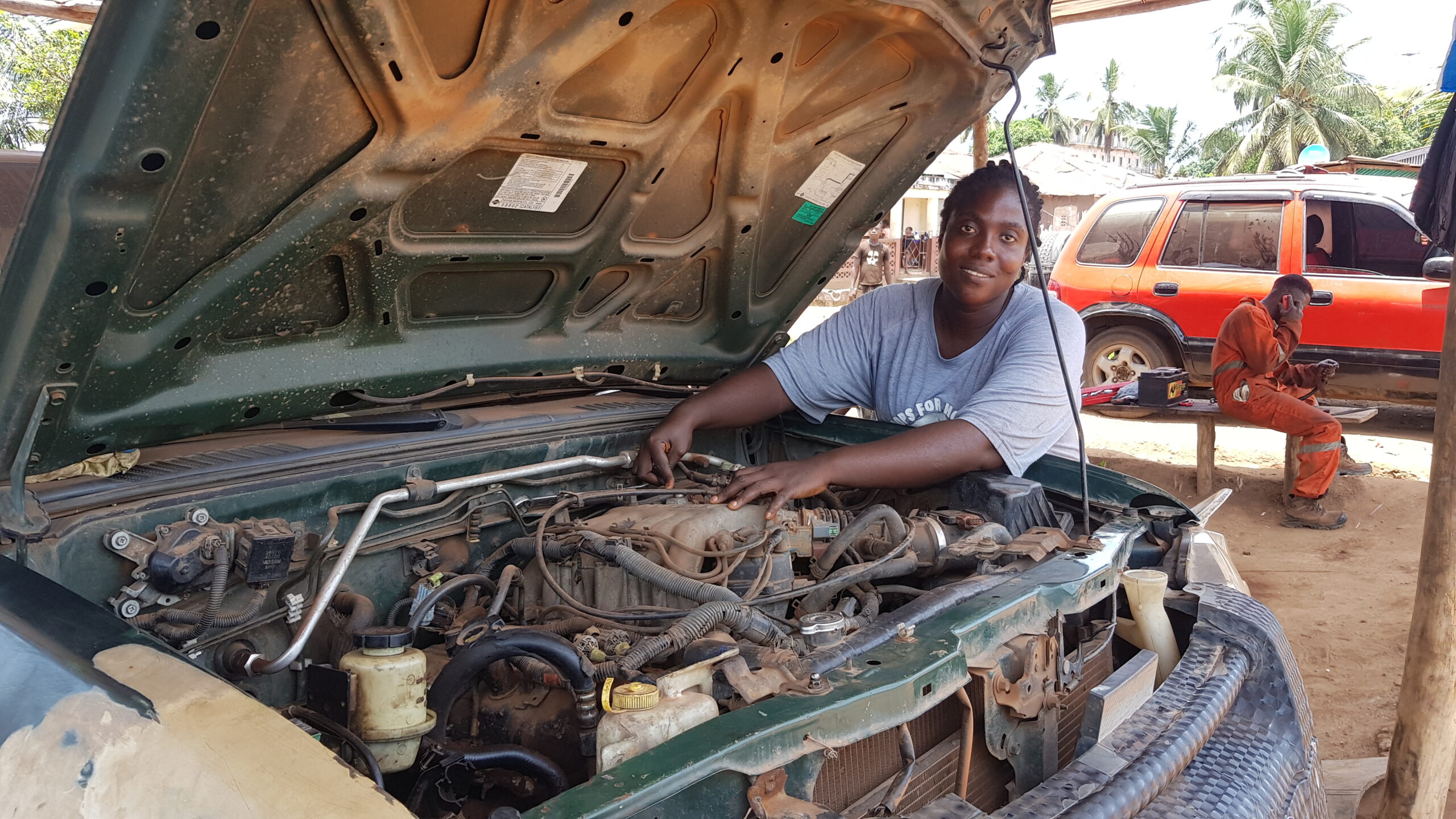 Just like three out of ten Liberian girls are pregnant each year before the age of 18, Munah*was not ready to become a mother at the age of 15. She used to do well in school and lamented having to drop out and live through the stigma and bullying of her friends.

“I was shunned and would feel inferior every time I bumped into a former classmate,” she remembers. “My heart would pound as they would make jokes about me dropping out of school because of a man and becoming a good-for-nothing housewife.”

Life beginnings were harsh and obstacles were many but Munah managed against the odds to pick herself up, to become a resourceful mother, a mechanic and a role model to her four children aged from eight to thirteen who all attend school.

Munah is an active member of a Village Savings and Loans Association (VSLA) called Amú-chìi”, which means, “we will survive” in the Bassa vernacular. Every Wednesday, her group meets under a tree in the neighbourhood where she lives to discuss issues that concern them, with SOS Children’s Villages Liberia providing support and oversight. At each meeting, Munah comes with a portion of money she has committed to save in the group and makes sure she writes down everything in her book.

“I’m at a very exciting time of my life right now,” Munah confesses. “I felt hopeless when the father of my children abandoned us but now I’m in a good place. I enjoy these meetings which are also a rare opportunity to share ideas, build up a support network with other mothers like me and learn about positive parenting, safeguarding and protection.”

“I’m also working as a mechanic apprentice which is something I never thought I could do,” she admits. “Although it’s a sector widely dominated by men, I think women can compete strongly and equally with their male counterparts,” she says proudly. “Many people see this as a male job, but I have the passion for it so I can do it and this allows me to save some money to support my children.”

Munah in the vehicle repair workshop working on a Gray Nissan Fortier, 2002 model

In March 2021, SOS Children’s Villages Liberia provided a small funding to all members of VSLA groups to help families hit hard by the COVID-19 situation in Liberia. Thanks to mobile cash transfers, every VSLA member received a phone with an 8650 L$ [+/- 40 EUR] top up.

In addition to the training and the cash transfer, Munah’s four children are also receiving educational, medical, and psychosocial support from SOS Children’s Villages Liberia.