Casemiro, a young Athlete carrying the hope of Liberia’s youth 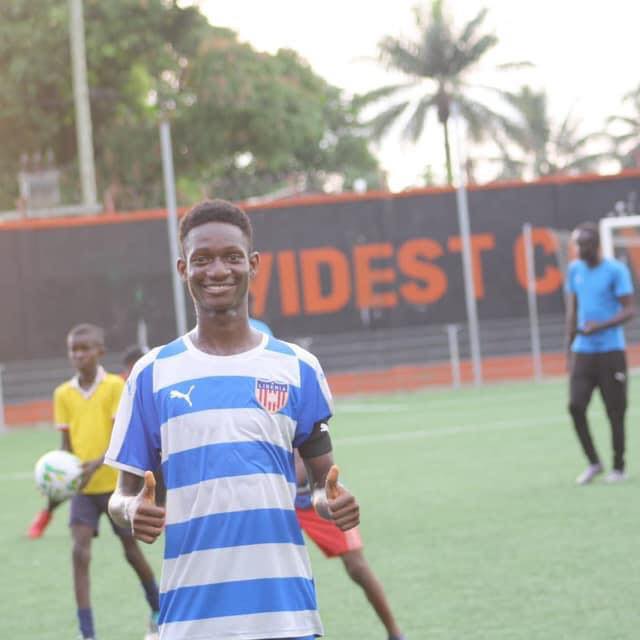 Despite just broken into Liberia under-17 football team, Casemiro David** is already creating plenty of headlines in Liberia. As a teenager, Casemiro grew up in SOS Children’s Village in Monrovia and attended the SOS Hermann Gmeiner International School (HGIS) in Matadi.

His love for football started a few years ago from watching football matches on TV. His favourite competition was the African Cup of Nations, and his dream was to play for Liberia one day.

“Playing my first game was an adventure, so having a chance to play for my country, and wear the red, white, and blues, is a privilege and one that I’ll never take for granted,” Casemiro remarks.

Casemiro began playing classes’ league soccer at HGIS, eventually making it to Liberia 3rd division league. The 16-year-old Liberian promising soccer star is quickly rising to the ranks of top midfielders for his playstyle. The Liberia under-17 captain is described as “a force of acceleration” by those who have coached him, why he has been dubbed the “Casemiro of Liberia.”

His skills and ability to get better during every game landed him a spot-on Liberia’s under-17 team. Playing for the under 17s national team and Street soccer, manager Bewell Tarpeh describes the youngster as one of the most talented players he ever coached. “While many doubted his abilities to perform at the highest level, Casemiro continues to shine for his club and country,” says Coach Tarpeh.

Casemiro impressed a lot of fans and made his mark with his performance during Liberia under 17s matches in Guinea and Austria in 2020 and 2022, where he helped Liberia win. “My biggest dream is being able to represent my country and win medals,” says Casemiro and he adds, “ten years ago, I never dreamed about being where I am now… It is a privilege and an honour to represent my country at international tournaments.”

This year’s World Youth Skills Day, under the theme ‘learning to learn for life and work,’ reminds us of the importance of giving young people the opportunity to learn to achieve their full potential. Casemiro’s story is a great example of how sports can play a pivotal role in this learning process.

SOS Children’s Village Monrovia has a football field, basketball court, and tennis court where young people can practice different sports of their interest and be coached by professional trainers. Exercise is a vital part of the village fun – not just for sport – it helps foster healthy habits and routines, socialise and build stronger relationships.

Having benefited from routine exercises and sport trainings while staying in SOS Children’s Village in Monrovia, Casemiro was able to travel to Austria with the Liberia under 17 men team, also known as “junior Lone Star”, as part of Liberia preparation for the upcoming WAFU under-17 tournament.

“Casemiro was one of the best players in the school. I am not surprised to see him playing at that level,” explained his former coach Tarpeh. Casemiro’s impressive accomplishment can be attributed to his hard work and the support he has received from SOS Children’s Villages in Liberia. “When young people are given the opportunities they deserve, the ball is in their court to perform,” Coach Tarpeh added.

Since the retirement of Liberia soccer legend, George Weah in 2003, no player as young as Casemiro inspired Liberian football fans like Casemiro did. And his performance is showing no signs of slowing down anytime soon.

For privacy, the names in the story have been changed to protect the participant’s identity.