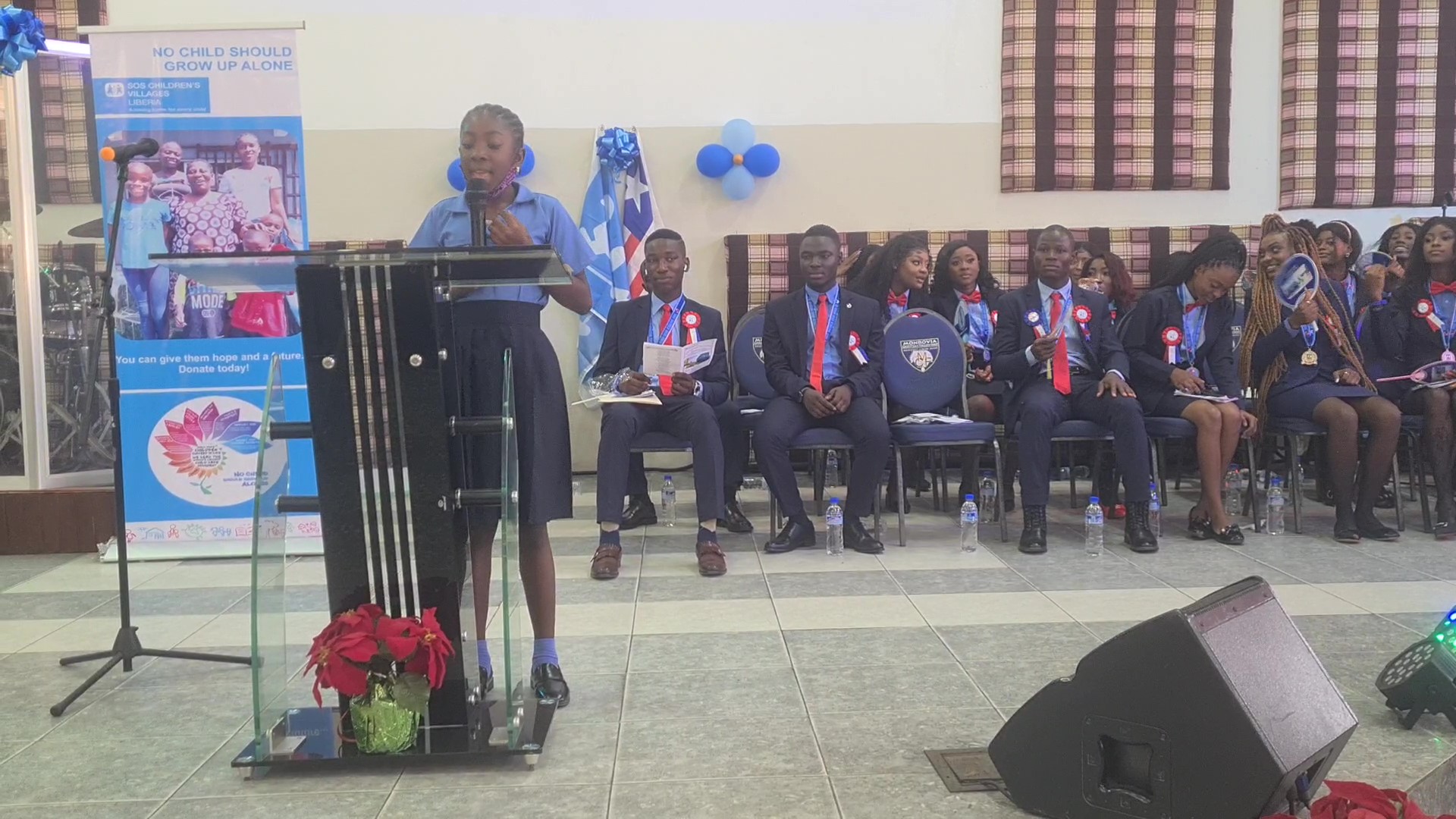 The teen was overwhelmed by the applause she received from the audience after fulfilling her role to introduce the guest speaker.

“I just cannot believe this is all for me,” Carol said quietly. The crowd — sitting in the hall couldn’t pull back Carol as she performed her task. They rose to their feet with roaring applause.

Carol in her neatly pressed uniform mentioned, “at first, I was nervous, but I had to do it and do it well.”

Delivering the keynote address at the 15th commencement program, Minister Varney A. Sirleaf, Minister of Internal Affairs, was thrilled. “It is difficult to see a brilliant little girl at her age these days. This may sound interesting, but it is a hard fact,” says Minister Sirleaf.

At grade three (3), Carol has already started earning praises from a cross-section of people. “I see leadership in that child. I am going to give her a scholarship,” Minister Sirleaf told the audience.

Addressing the graduates on the topic “challenges,” the minister praised the graduates for their commitment.  “The fact is you are special, and you have done something special. To go through high school amid a global pandemic is unprecedented,” he lamented.

The Minister, urged the students to take their learning very seriously, cautioning them against being complacent. He congratulated the graduating class for their achievement. He also awarded over four scholarships to outstanding students in the recent West African Senior School Certificate Examination (WASSCE).

Carol** posed for a photo with caregivers, social worker, and her siblings

No stranger to crowds, Carol was 6 years old and in Kindergarten in 2018 when she welcomed special guests of SOS Children’s Villages in Liberia; honorary president Helmut Kutin and  former EU Ambassador to Liberia, her excellency Ambassador Hélène Cavé respectively.

In 2021, as one of the special guests, Carol represented children and young people in Liberia at the Day of the African Child (DAC) celebration. She spoke on child abuse at the prestigious event attended by young people and renowned leaders.

Even her mom did not fully realize the magnitude of what had transpired until she turned on the television.

Recounting the story sitting in a leather chair, Mother Ruth remarked: she was astonished when she saw her daughter on Sky television. “I shouted, this is my girl. I was so proud,” Ruth added.

Liberia ranks 7th globally and 3rd in Africa for maternal and newborn mortality. Liberia loses 11,000 children under five each year. One out of every ten women dies while pregnant or giving birth. (Source, UNICEF).

Carol, who has been in alternative care for the past seven years, has the ambition to become a pediatrician. Carol said she wants to go into pediatrics because her wish is to provide medical care for children and to advocate for them within the health care system. Although there is a long haul to becoming a pediatrician, nothing is impossible.

For privacy, Carol** is not the real name of the child.