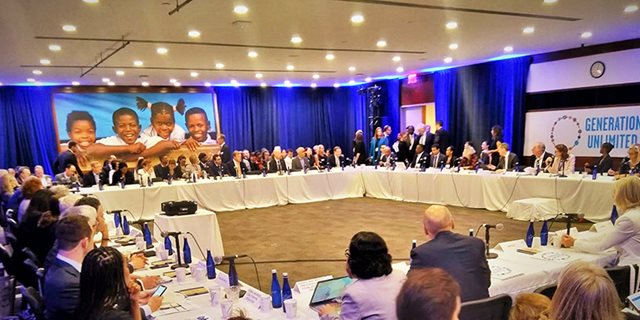 New-York-30-Sept-Children’s rights and their futures played a key role in debates on climate change and the 30th anniversary of the United Nations Convention on the Rights of the Child, both of which are major topics at this year’s UN General Assembly.

SOS Children’s Villages International highlighted the importance of the principle “leave no one behind” in debates as well as the specific needs and rights of children without parental care including young people who leave care and children at risk of losing parental care.

Norbert Meder, CEO of SOS Children’s Villages International, also attended the third meeting of the Generation Unlimited partnership, a side event at the UN General Assembly. The partnership aims to help build a future for young people to become active citizens.

“Let’s be guided by the principle of ‘leave no one behind’ in all our actions. Mobilising the power of young people, we can co-create youth-led solutions to the challenges they face,” said Mr  Meder, a member of the Generation Unlimited Board.

This year’s General Assembly has also seen an unprecedented involvement of children and young people themselves in debates affecting their lives. Several child delegates addressed global leaders including António Guterres, UN Secretary-General and UNICEF Executive Director Henrietta Fore at the commemorative event to mark the 30th anniversary of the adoption of the Convention on the Rights of the Child in which SOS Children’s Villages International also took part.

Other issues discussed at the UN general Assembly include universal health coverage and financing for development.