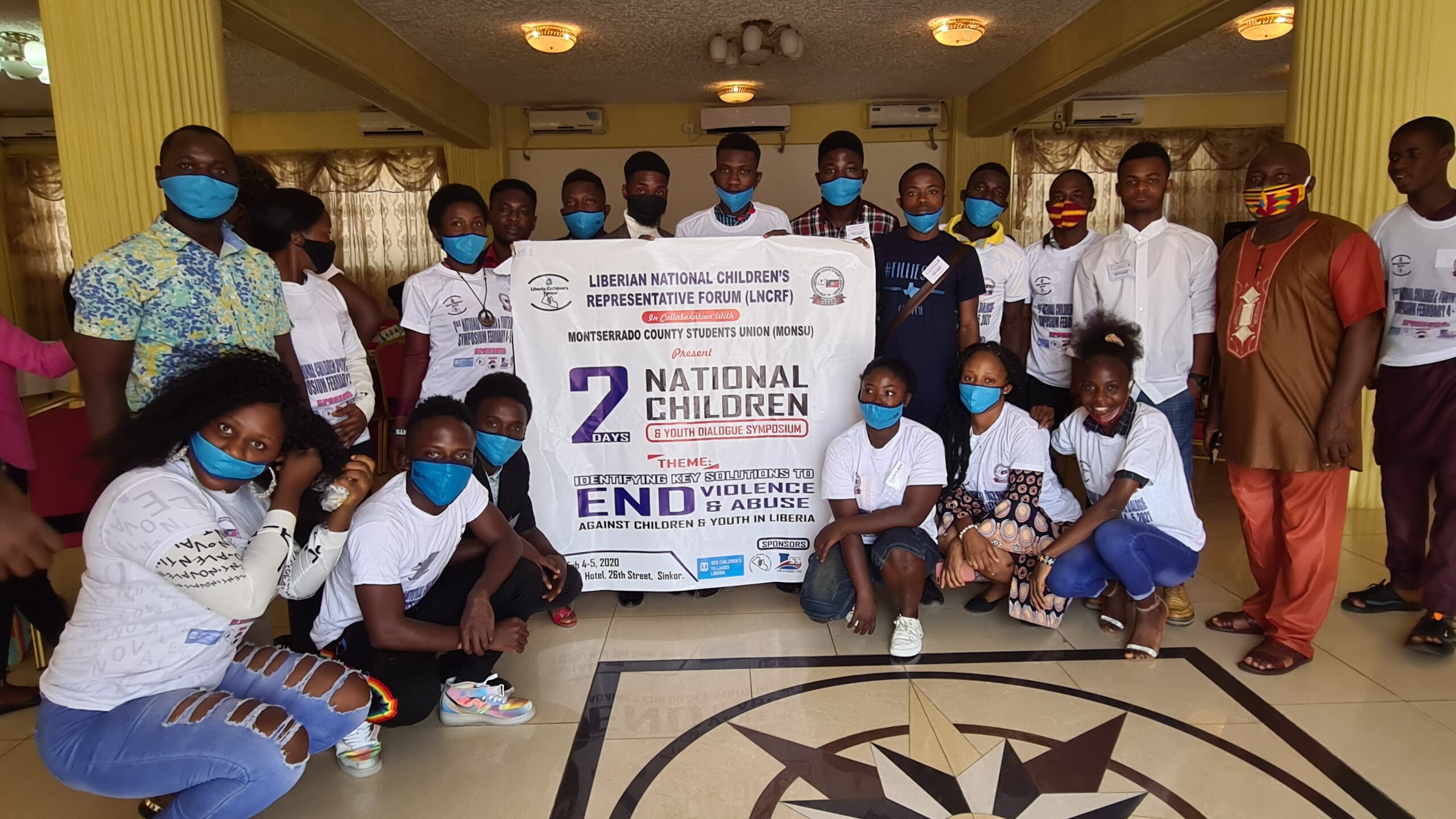 According to an update provided by the Ministry of Gender, Children and Social Protection (MoGCSP) in June 2020, incidence of various forms of abuse affecting children and young people in Liberia increased by 50 percent since the outbreak of Coronavirus. For example, during the first half of the year 2020, the MoGCSP recorded more than 600 cases of rape alone, a statistic that is almost equivalent to the yearly figure reported for 2019.

Due to this alarming trend of abuse, 2-day National children and youth symposium was organized by the Liberia National Children’s Representative Forum (LNCRF) in collaboration with the Montserrado Student Union (MONSU), with support from SOS Children’s Villages Liberia and the Ministry of Gender, Children and Social Protection (MoGCSP).

The National Children and youth symposium managed to bring together about 100 young people from the Liberian Children’s Representative Forum, Montserrado Students Union, and other youth groupings. Of the total number of young people attending the symposium, about 25 of the participants were SOS youth.

The National Children and Youth Symposium which was held at the Corina Hotel in Monrovia from February 4 to 5, 2021, under the theme “identifying key solutions to ending violence and abuse against children and youth in Liberia”, was intended to give children and young people a voice in addressing issues affecting them, especially during the COVID-19.

“The lack of joint efforts and adequately resourced undermines the fight against Child abuse and rape,” said Prince Saydee, Speaker of the Liberian Children’s Representative Forum.

Even though violence against children and young people in Liberia is a sad reality before coronavirus, the pandemic has exacerbated this reality as the government declared rape a national emergency on September 11 last year.

The young people praised the move but emphasized the need for the government and stakeholders to do more to minimize child abuse. “Funding and partnership are an essential component in the fight against child abuse and rape,” said Jepoteh, an SOS youth.

The Guest speakers called for urgent action against the alarming increase in rape and child abuse. Minister Walliamenta Saydee Tarr urged stakeholders to work with the government to stop child abuse and rape.

The awareness of child abuse and violence against young people has not translated into strong conviction. There is more that needs to be done.

“Child abuse and violence against young people cases are often compromised that is one of the reasons why these cases are sky-rocketing,” said Kessele Monibah, SOS Liberia Child safeguarding & Protection Coordinator.

The Disturbing Trends of Child Abuse:

Due to the disturbing trends of abuse, all key speakers, at last year Day of African Children (DAC) celebrations in Liberia on June 16, 2020, including SOS Children’s Villages National Director Augustine Allieu called on government and partners to take concerted actions at addressing the alarming increase of abuse, such as rape and other forms of violence against children and young people.

The National Children and Youth Symposium is an outcome of the 2020 DAC celebrations. That set the stage toward ending abuse, such as rape and other forms of violence against children and young people.

Empowerment- A powerful tool in the fight against abuse:

Even though the fight against child abuse and rape is a long-term fight that requires resources and resilience. SOS Liberia is leading the fight. SOS Liberia in the last few months is re-directing efforts and more resources to child safeguarding and addressing the needs of young people. The organization recognizes her position and ability to play an active role in minimizing the adverse impact of child abuse.

For example, SOS Liberia has developed a child safeguarding policy, reporting abuse and responding mechanism, including anonymous reporting and introducing a new and safe platform for reporting abuse.

SOS Liberia is also building the capacity of young people to advocate for their rights and to ensure access to learning and protection. The organization is supporting the Liberian Children’s Representative Forum on peer-to-peer education as well as empowering young people to serve as ambassadors of change.

While SOS Liberia continues to support MoGCSP to build the capacity of social workers as well as provide technical assistance. The organization is working with other NGOs, including Plan International and Save the Children under the banner of “Joining Forces for Children” to address issues affecting children in Liberia.

Furthermore, SOS Liberia is also working closely with community-based groups, such as child welfare committees and child protection networks, to raise awareness on child rights, protection, and other issues that are detrimental to children and young people.

The recent symposium was a key solution and a mechanism for cultivating a culture of participation and consultations with young people, fostering meaningful engagement with real impact on further strategies and programmes, which influence the lives of young people.